Recently one of my friends Hiko, who is from Tokyo Japan, recommended a Japanese group to me, it’s called Mr Children. yesterday I sent him a funny Japanese Christmas song called Jingle Bells – 7人の麦わら海賊団, which is from the popular cartoon One Piece（ワンピース） of Japan – I really love this cartoon, haha. And he said, oh, you know, Mr Children would make music for the movie if the author Eiichiro Oda 尾田 栄一郎 make a One Piece movie. Then that’s how I know Mr. Children.

He said Mr Children is the most popular group in Japan right now. here I will have you one of their songs called Hanabi. This one is just awesome!

Mr. Children, commonly called “Misuchiru” (ミスチル), is a Japanese rock band formed in 1988 by Kazutoshi Sakurai, Kenichi Tahara, Keisuke Nakagawa, and Hideya Suzuki. As a group, they are one of the most successful Japanese pop artists, having sold over 50 million records and creating the “Misuchiru Phenomenon” (ミスチル現象) in the mid 1990s in Japan.

My friend in Japan sent me a url about Japanese Gravure idol, well, it’s my first time hear about something like that, totally strange thing for me. But it seems nice. The girl’s name who’s in the video is 西舘さをり = Sawori Nishidate (I googled it :P) 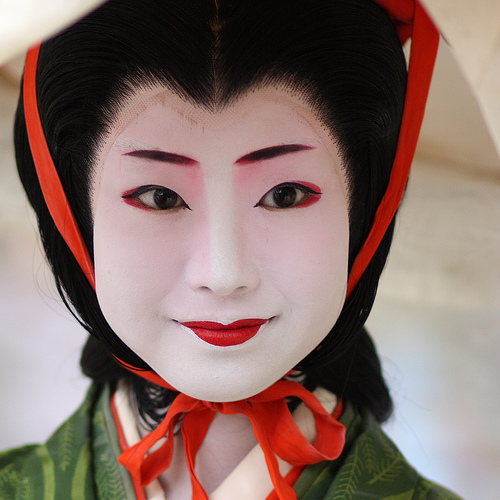 Wow! This photo is just awesome! OK, and amazing! I think this one absolutely is today’s favorite after I saw hundreds of photos on Flickr so far! Japanese culture is so beautiful :)

Photo: written but not pronounced Today’s my favorite photo on Flickr. This one is really nice. Everything is wonderful on this photo, the hat, the eyes, the Japanese Character – 魔 = Devil (maybe).